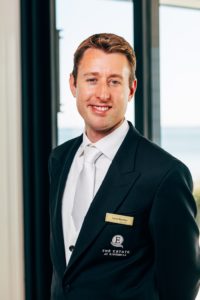 Your stay at The Estate at Kingsmill is much more than a vacation, it’s a modern luxurious experience. Our Estate Manager David Wandrey is on hand to create a complete bespoke itinerary custom tailored to you.

David majored in Hospitality and Recreation Management at North Idaho College. After college, he relocated to Orlando. Here he pursued a career with The Walt Disney Company, performing multiple internships including attractions, ticketing and taking care of the guests in the Cinderella Castle Suite at Magic Kingdom at Walt Disney World. His favorite, and one of the most coveted roles within the company, was being a VIP tour guide. David used his park knowledge, ability to serve and attention to detail to execute vacations for high net worth families visiting the Walt Disney World area. He escorted them through the parks while building close relationships to bring them back for years to come.

After almost eight years with The Walt Disney Company, David was recruited by Four Seasons Hotels and Resorts to help open the Four Seasons Resort Orlando at Walt Disney World. He helped build their Concierge program by partnered with local restaurants, attractions and experiences in the Orlando area, recommending these locations to his guests. His knowledge of the area allowed him to create vacation itineraries both pre-arrival and last-minute requests. David was given the opportunity to transfer to Four Seasons Scottsdale to refine their Concierge program. His extensive knowledge of the Forbes 5 star and AAA 5 Diamond standards was imperative when taking on his new responsibilities. David created new collateral and processes and procedures to better assist staff and guests in booking experiences around the Scottsdale area.

After three years with Four Seasons Hotels and Resorts, a colleague reached out to David with an opportunity that changed his entire career path. He was asked to be a butler and help manage a private estate in Dallas, TX. After spending time with this family David wanted to expand his knowledge even further and attended the number one butler school in the world, The International Butler Academy. There, he trained to become a formal butler at the largest private estate in the Netherlands. This academy trains the butlers that work in Buckingham Palace for the Queen of England and Royal Family. Then, to add to his already impressive resume, he received his Introductory Level 1 Sommelier Certification and developed a greater knowledge of wine.

Soon after returning to Dallas, David received a job offer for a different family and took on the role of an Estate Manager. He managed multiple large-scale private estates across the country for this family. Some of his duties included being the chief of staff and acting as a personal assistant to the principals of the household while maintaining the highest standards as if running multiple 5 star hotels.

Back to The Estate at Kingsmill >